St. George’s Scholar Institute’s staff is committed to
positively impacting the youth in their community.

“It is our hope that you too will be inspired to join our endeavor of impacting lives and slaying the dragons that impede this positive growth of our children, their families and our communities.” – Arthur Cox, Executive Director 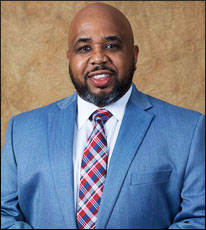 Arthur Cox, Executive Director
A native to Louisville, Kentucky, Arthur Cox has worked as Executive Director of St. George’s for over ten years. In 2004, he led the successful organizational transformation from a recreational hangout into a premier educational after-school program for youth in West Louisville, where it still thrives today. Arthur earned a Bachelor’s Degree in Sports Management from the University of Louisville. He has served as numerous youth development committees and coalitions within the community and is trained in outcomes, Youth Quality Assessment Programs, and nonprofit leadership. Prior to his role at St. George’s, Arthur worked with Youth Alive, YMCA, and LYON. In his leisure time, he enjoys traveling and spending time with his two beautiful children, Omari and Aniyah.

Keishanna Hughes, Director of Programs
Keishanna Hughes joined St. George’s Scholar Institute as Program Director in April 2014 with more than 10 years experience in the field of youth development. Prior to joining SGSI, Keishanna was the Youth Development and Education Manager at the Presbyterian Community Center. There, she designed youth programs, developed community outreach projects, and directed the summer literacy program. Keishanna also founded Always Sisters, a mentoring group for at-risk females aged 6-17. In addition to her role at St. George’s Scholar Institute, Keishanna is a former power member of the Network Center for Community Change and a facilitator at The University of Louisville Kent School of Social Work’s CHAMPS program, a five- year teen pregnancy and disease prevention program. She is also a trailblazer for the promotion of urban health and fitness, especially in Smoketown. In fact, she was featured in The New York Times for her fight against obesity! In her leisure time, Keishanna enjoys spending time with her four teenage children: Quantinae, Keontez, Najja, and Ryan.

Abigail Gordon, Administrative Assistant
Abigail Gordon joined St. George’s Scholar Institute in October 2012 for a 10-month Episcopal Service Corps internship and, following the completion of her role as an intern, was welcomed on as Administrative Assistant. During her internship, Abigail implemented a social media campaign titled “We Live Here” and continues to maintain a strong online social media presence for St. George’s Scholar Institute. In 2008, Abigail earned a Bachelor’s Degree in Advertising from West Virginia University’s Perley Isaac Reed School of Journalism. Currently, she attends the University of Louisville where she is working towards a Masters in Public Administration, specializing in nonprofit management. When she is not working, Abigail enjoys working in SGSI’s garden plots at the Parkland Community Garden and cheering on the WVU Mountaineers.

Bozwana Sankofa, Youth Coordinator
Bozwana Sankofa officially joined St George’s Scholar Institute as Youth Coordinator in September 2014. She has over 15 years of experience in the fields of health and fitness, physical science, and business administration. Previously, Bozwana has worked for St. Anthony Outreach Center as Youth Health & Fitness Coordinator and the West Broadway United Methodist Church in Louisville, Kentucky. She also worked in Washington, D.C. as the Youth Health and Fitness Coordinator for the Tri-Community Charter School and D.C. Recreational Department. There, she taught a range of subjects including art, health and fitness, earth and space sciences, and cultural diversity. In addition to her role at SGSI, Bozwana also works as a tax preparer for Jackson Hewitt. She enjoys karate, dance, and spending time with her children, Kintai’O, Ny’Kia, and Jamillia.